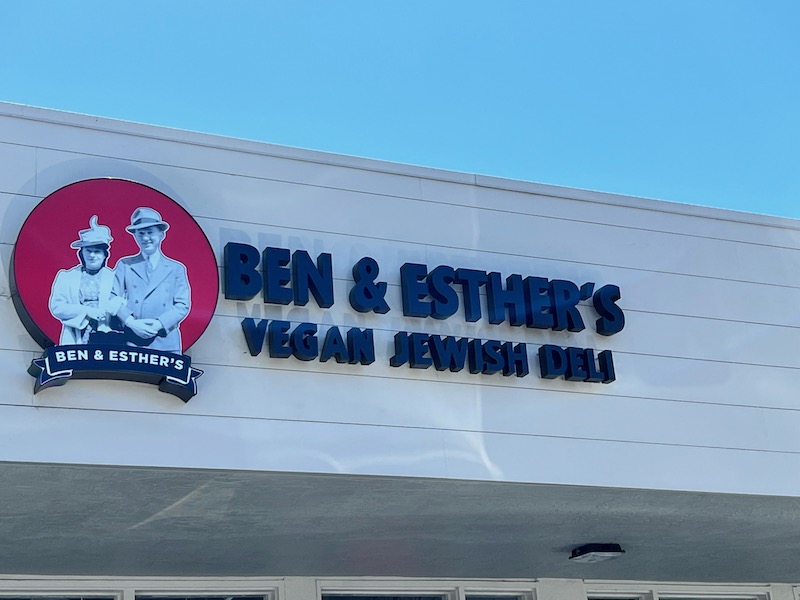 For those living on or visiting the West Coast, Ben & Esther’s Vegan Jewish Deli is an absolute must for delicious vegan food. This treasure has two locations in Portland, Oregon; two in San Diego County; and a brand-new location in Seattle.

We visited the San Diego shop on a Friday afternoon; it’s tucked away in a university neighborhood, and while it’s perfect for takeout, it also has some lovely, shady outdoor seating.

The menu is entirely vegan and, judging by the myriad items we sampled, almost entirely delicious. Whether you want bagels or sandwiches, sweets or snacks, there’s something here for every appetite.

We got lunch, including a scrumptious bacon, egg, and cheese bagel. The bagel was toasted, and the cheese was melty and gooey. As you can see, there was plenty of egg and bacon to make this a very hearty sandwich.

We also got a chicken-salad sandwich on marble rye, which was equally scrumptious. The chicken salad was absolutely perfect, with an amazing texture and just the right amount of mayo. Along with the fresh bread and veggies, it was fabulous.

To bring home, we got some mac salad, which we thought (hoped) would be creamier; it is made with a light lemony carrot dressing along with shredded carrots, and was lovely even if not smothered in mayo, which may have been our preference but perhaps isn’t everyone’s. The egg salad did have a wonderful creaminess to it, and plenty of dill (which is a great thing in our view). Likewise, the tuna salad was very dilly and slightly less creamy, but had an exceptionally authentic tuna flavor; the texture was amazing, perfect for sandwiches or to add to a green salad.

We made another visit, to the Oceanside shop, which is larger with several tables inside a wide, high-ceilinged room, and a couple of tables outside.

We sampled the potato salad, which has a light, non-creamy dressing and lots of dill; it tastes fresh and light. The turkey club sandwich is giant (in a good way), with slices of turkey, bacon, cheese, and lots of yellow mustard.

The BLT is nothing short of amazing, with its vegan bacon, fresh romaine and tomato, and tons of vegan mayo.

We took home matzo ball soup (which is fantastic) and plenty of bagels, along with three varieties of cream cheese: bacon-scallion, veggie, and jalapeño, all of which are superb: rich, creamy, flavorful.

I hope Ben & Esther’s opens up many more locations; the food is wonderful and this lovely shop is a force for good in the world. It was great to see the shop being busy, especially the Oceanside location. And, for all those who know Southern California, both locations have parking!