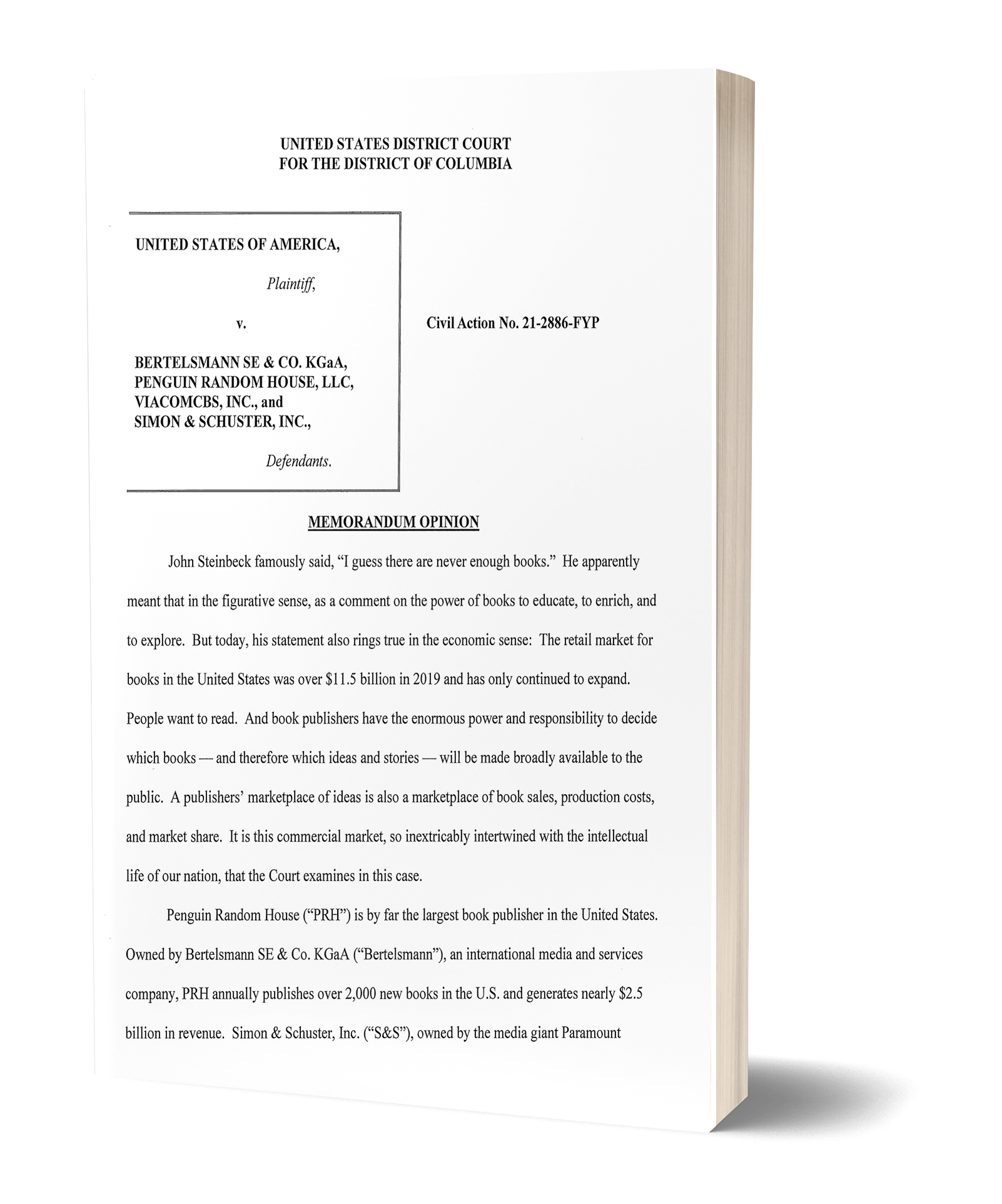 And do you know that we recently witnessed a merger that would have resulted in a “Big 4”?

You might have seen a mention of the US Justice Dept. winning a battle to put a halt to a proposed merger of the largest US publishing house, Penguin Random House, and the third-largest house, Simon & Schuster.

Now you can read all about why US Circuit Judge Florence Pan blocked (or enjoined, which I had to look up) the merger.

And, honestly, this report is a great read.

You have to mind the copious footnotes, but here’s a sample:

Each publishing company is organized as an umbrella organization that houses various “imprints.” An imprint is atrade name or brand name for an editorial group. Imprints specialize in publishing certain types of books and thus develop reputations for success in particular genres. See PX 530 at 2. The editors within each imprint select and acquire manuscripts for publication; and then collaborate with authors to develop and finalize their books. See Trial Tr. at 97:1-6 (Pietsch),1915:10-25 (Duhigg), 1919:8-1920:3 (Duhigg). PRH has close to 100 U.S. publishing imprints within six publishing divisions. See Trial Tr. at 812:5-11 (Dohle); Govt. Demo. 1 (PRH organizational chart). Its best-known imprints include Viking, Penguin Press, Doubleday, Riverhead, Random House, and Putnam. S&S operates three publishing groups with around 50 imprints, including Simon and Schuster, Atria Books, Scribner, and Gallery Books.

Are you curious about author advances, negotiations between editors and agents, the subtle but important ways a book advance can double or even triple?

Regardless of the method used to acquire a book’s publishing rights, the amount that is paid is inexorably determined by competition. In an auction, a skillful agent can capitalize on enthusiasm for a book and play bidders off against one another, knowing that a publisher will “bid what … [it] need[s] to buy that book” because “it [only] takes one passionate editor at another imprint to win that book away.” Trial Tr. at 1965:21-25 (Kim). Although the perceived value of a book is subjective and may vary among editors, there is often a consensus among industry players about which books will be successful. See id. at 2108:14-24 (Wylie) (“I think there are recognizable qualities in – in books that people who have been in the business for a long time would easily recognize.”), 310:12-24 (Pande) (agent explaining that she treats an anticipated strong seller differently, such as by “sending it out as widely as I possibly can”).

It is not uncommon for editors and publishers to experience a “kind of auction fever,” in which they change theirsales expectations for a book and increase what they are willing to pay for it during a competitive round-robin auction. Id.at 180:20-181:11 (Pietsch). “[T]he interest of other parties validates [a publisher’s] own sense of what a book is worth.” Id.The record contains numerous examples of books that sold for unexpectedly high advances and achieved other favorable terms for their authors due to the bidding frenzy incited by competitive auctions. For instance, in a hybrid auction of rounds followed by best bids, [title redacted] initially received bids of between $150,000 and $400,000 from four publishers. See PX 944-B (Porro bidding summary); Trial Tr. at 923:16-930:18 (Tart) (discussing book’s acquisition); PX 320 (emails). After six rounds of bidding, PRH’s Viking imprint more than doubled its initial bid and won the book for $775,000 “over stiff competition.” PX 39 (email from Tart); see also PX 944-B (Porro bidding summary); Trial Tr. at 923:16-930:18 (Tart). At the best-bids stage, Viking decided to “stretch” from its initial bid clearance of $700,000 because “there just is literally no telling what the opponents hold in their hands.” PX 326 at 1 (emails between Tart and Viking editor Wendy Wolf). Another example is [title redacted], which also benefitted from a rounds auction. See PX 948-B (Porro bidding summary). In the first round, there were three bids, ranging from $200,000 to $300,000. See id. Yet after five rounds, –  received $535,000 plus a $100,000 bonus. See id.; Trial Tr. at 433:24-435:17 (Karp) (discussing bidding process); PX 632 (emails discussing auction). The record contains at least 11 other examples that illustrate the sharp increase in prices engendered by competitive auctions, with advances increasing at least $100,000 by the end of the auction.7

And care to wonder just how difficult it is to publish a profitable book in this day and age?

All publishers and editors are highly motivated to secure the rights to publish new books; indeed, identifying and acquiring books that people want to read is the essence of the business. Yet only 35 out of 100 books tum a profit, and breakout titles drive revenues –  the top 4 percent of profitable titles generate 60 percent of profitability.

You read that right — just 4% of titles generate the vast amount of revenues input publishing. Which is why our mantra here at Ashland Creek Press is that we’re just one bestseller away from success.

We’ll get there one day, or so we tell ourselves. But I now know that it’s not easy to compete against the Big 5…

The best proof that would-be new competitors face formidable barriers to entry is the stability of market shares in the industry: No publisher has entered the market and become a strong competitor against the Big Five in the past thirty years.

And, spoiler alert, here is the gripping conclusion:

Accordingly, the Court finds that the proposed merger of PRH and S&S violates Section 7 of the Clayton Act because it is likely to substantially lessen competition in the market for the publishing rights toanticipated top-selling books. The Court therefore will enjoin the merger.

At 80 pages, it would make a nice short book, but not a book we’ll see published anytime soon by Simon & Schuster or Penguin Random House.