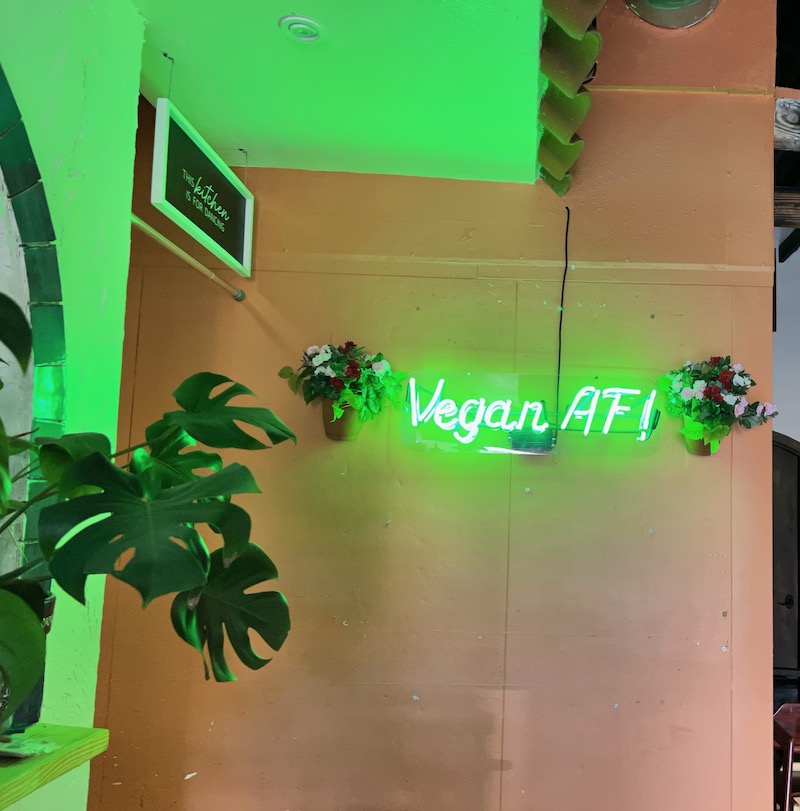 North San Diego County has some of the best Mexican food north of the Mexican border. So it was thrilling to discover Phatties, an all-vegan Mexican restaurant, right in downtown Escondido.

Phatties is in a small shopping center that has a vegan grocery and deli next door: while waiting for our Phatties order, we hopped over to Vegan Nectar, where we perused the menu (bowls, salads, smoothies, and such sandwiches as vegan Ruebens, Turkey Clubs, and BLTs) and stocked up on snacks (vegan cheese crackers and a half-dozen puffed snacks in flavors from “chill ranch” to jalapeño cheddar to white cheddar). Vegan Nectar also has a fridge filled with fresh juices and vegan cheeses including Miyoko’s and Violife, and a freezer with frozen vegan meals, Impossible products, Just Egg products, and much more.

The interior of the restaurant is very small; you order at the counter, and there are a few tables for dining inside. We visited in the heat of summer, when no one was indoors, but diners gathered on a wide, inviting deck-in-progress outside, which has plenty of seating and a lot more room than the cozy interior.

The menu has a vast range of vegan Mexican specialties — ceviche, huaraches, enchiladas, quesadillas, tacos, burritos, vegan birria, and more — and it was hard to decide what to order. In the end, we decided on simple favorites: a breakfast burrito and a bean-and-cheese burrito.

The breakfast burrito was wonderful, with “soyrizo,” vegan egg, fried potatoes, and lots of melted vegan cheese. The tortillas are fresh, homemade, and toasted to perfection. The bean-and-cheese burrito was stuffed with vegan cheese that, unfortunately, had not yet completely melted. We’d gotten takeout, so it was easy to put the burrito in the microwave and enjoy it in its full cheesy glory. Had we been at the restaurant, though, we’d probably have sent it back for reheating (vegan cheese can be notoriously hard to melt, but still).

Overall, this was a great meal and it would be fun to try new and different things on the menu. While it’s possible to get a vegan-friendly burrito or taco in many places, a full vegan breakfast burrito is hard to find, and any Mexican dish with vegan cheese is a treat.