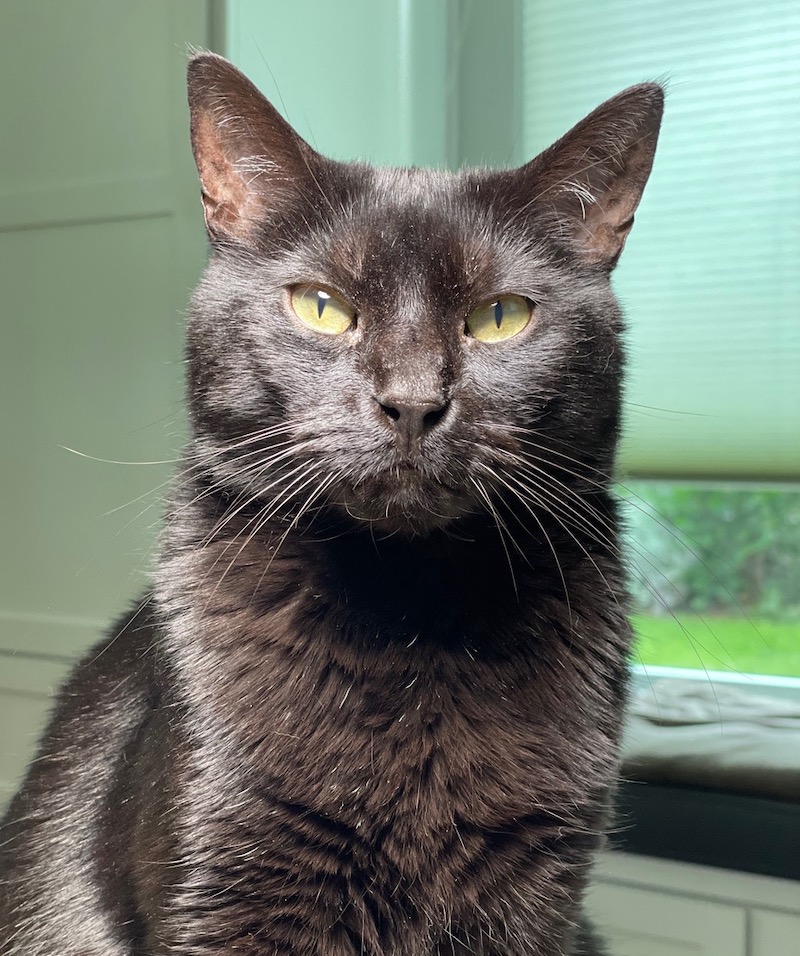 How old was Ted? 14? 18? We’ll never know. He had a lived a lifetime before we adopted him, and he looked it that day in the animal shelter. Horse-hunched, distended belly, a belly devoid of fur. We learned later that he overgroomed what was left of his fur, a sign of anxiety like biting one’s nails. But we have a thing for the misfit cats. And he fit right in with our other two.

He slept a lot. Some days twenty hours. So much so that I once said he was half a cat.

But I had simply not yet gotten to know Ted. It wasn’t about the hours he spent with his eyes open. It was about how he spent those precious few hours.

He was, like so many cats, particular about his food — as well as where he chose to take his meals. He refused to eat from a dish on the kitchen floor, looking at us as if to say, “Do you think I’m some kind of animal?” He took his breakfast on top of the file cabinet next to my desk. He took his dinner on the ottoman in the living room. No other locations would do.

And Ted was a nibbler. So I would take the dish away after he was done, and he would hop down, only to return thirty minutes later for another course. He rarely meowed. Instead he would wait patiently, whether for me to bring his kibble dish back or to turn the water on at the faucet for him to have a drink. Over time we learned his many preferences and served him as best we could.

In truth, he demanded little of us. And, in return, that purr. You could say a few words to him, simply speak his name, and he would erupt into purrs that could be heard from across the room. And in the evening he would briefly climb into my lap and knead my belly staring straight at me, with a purr so loud that we had to pause whatever it is we were watching.

After his cancer diagnosis, we knew every moment with Ted was bonus time, and we enjoyed every purr all the more. We hopped to make sure he got his food when he wanted it, where he wanted it. For a cat that used to freak out about having his nails trimmed, he was so good about getting his daily steroid pills and occasional antibiotic. And his purrs remained as constant and as loud as ever. Until a few weeks ago.

When Ted stopped eating, we knew it was time to let him go. He loved his life so much, especially the simplest things: being served food, getting a drink from the kitchen faucet, finding a patch of sun to nap in or a warm lap to curl into. Once he settled in with our family, his fur grew thick and glossy, though his tummy fur never grew back, so he always had a little bald spot that gave him even more character.

Ted was the most silent member of our family, and yet he leaves such a hole in our lives, a hole the size of twice a cat.

8 thoughts on “Goodbye to our Ted”