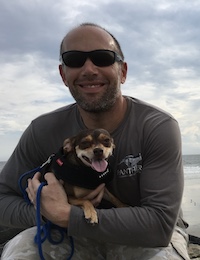 A: “Last of the Sasquatch Wilds” was inspired by our previous presidential administration’s (here in the U.S.) push to expand the reach of private corporations to drill for fossil fuels on national parkland while simultaneously gutting the Endangered Species Act.

A: The beauty in writing speculative fiction is it curtails a lot of the research I’d do for a piece set in a less “fantastic,” real-world environment. That said, growing up in New Jersey many moons ago, I was involved with a grassroots animal rights organization, so elements of those experiences wormed their way into the story, albeit in a heightened, more action-packed, and certainly more explosive way!

Q: What inspires your speculative writing?

A: Real life––from microcosmic personal worries to macrocosmic global concerns. I’m an escapism junkie, but escapism-as-wish-fulfillment or escapism-for-escapism’s-sake don’t interest me. Something needs to ring true.

A: Writers of the early-to-mid-twentieth century were the first to really capture my imagination—T. S. Eliot, Virginia Woolf, Ernest Hemingway, Robert E. Howard, Patrick Kavanagh, and Samuel Beckett to name a small handful. I primarily read nonfiction nowadays––Coyote America by Dan Flores is a mind-blowing work about human/nonhuman relationships and how they shape culture, consciousness, and history. And as I’m sure is the case with many of your readers of a certain age, Peter Singer’s Animal Liberation was a complete game changer that shifted the course of my life in innumerable ways.

Q: Why did you choose the Sasquatch to focus on?

A: The Sasquatch serves as a placeholder––the proverbial everyman––or, more accurately, everyspecies. For most of us (especially those of us who live in more urban or suburban environs), the wholesale extinction of so many species and the degradation of their habitats occurs “off-camera.” They’re existential crises that may not always directly resonate in our day-to-day lives. If our species manages to persevere over the next century, and orangutans or piping plovers or honeybees are scrubbed from reality, they’ll be little more than myth to future generations––imaginary as dragons or unicorns or the Sasquatch.

A: Ideally, my stories coax readers out of themselves for a bit and provide a brief respite from the mundanities of the everyday. Anything else is a bonus.

James Edward O’Brien’s story, “Last of the Sasquatch Wilds,” appears in Among Animals 3. Jim hails from Bloomfield, New Jersey. His short fiction has appeared in numerous anthologies and speculative fiction magazines, both online and in print, as well as on the StarShipSofa and Tales to Terrify podcasts. He currently resides in Queens, New York, with his wife and three rescue dogs.