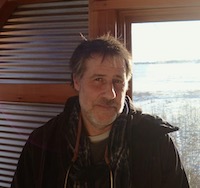 A: After I completed my MFA, and I was starting my writing career, I wanted to remain connected with animals and animal life. One of the ways I did that was by volunteering several summers in a row at the Wildlife Rehabilitation Center at the University of Minnesota, where I cared for orphaned and injured songbirds. This story is largely drawn from that experience, inspired by the individual birds I got to know during that time and a volunteer I worked alongside.

Overall, the writing recipe for me nearly always consists of healthy doses of experience followed by several more of curiosity and imagination. This story follows that recipe.

A: The detail about rehabilitating songbirds was drawn straight from my own experience at the Rehabilitation Center—daily hands-on feeding, cleaning, handling, and caring for these varied songbirds, each with their own unique personalities.

I also researched the phenomenon of avian “accidental species” to incorporate that into the story as accurately as I could, but that element of the story isn’t meant to be interpreted literally. A vermilion flycatcher showing up in Michigan would be an extreme case of a bird species veering from its range. If someone gets stuck on the extremity of that, they’re missing the intent.

Q: Have you experienced sighting a vermilion flycatcher (or other species) so far out of its range?

A: I’ve certainly witnessed animal species expanding their territory due to climate change, as we all have. I’ve lived on the same Minnesota lake for the last twenty years and observed the shift of bird species abundance and waterfowl migration. I don’t know if North Americans realize we’re on the path toward losing two-thirds of our birds. Two-thirds. It sounds theoretical. People don’t react to theoretical. But you’d have to be blind not to notice the changing terrain of our own backyards. Here in Minnesota, it comes in the form of deeper, more algae-filled lakes, muddier streams, cool boreal forests rooting into grassland savannahs. We’re losing, daily, the habitat that native birds and animals need to survive. Wider migration is an attempt to adapt. But it isn’t a sustainable answer. Eventually these beings run out of habitat.

The vermilion flycatcher in my story was meant to serve a more literary purpose than literal. It’s meant to provide a feeling of a world slightly off balance and to illuminate some of the story’s themes. What’s it like to be out of place? How can you love or give freedom to something that doesn’t belong to you in the first place? And how do we define what normal is? A Mexican bird showing up in a Michigan backyard, and a young bipolar woman who invents her past to adapt her present—they’re both “accidental species” in different extreme ways, connected to each other.

The story isn’t about climate change. But the fact that our world is spinning off its axis due to a warming planet—we’re all witnessing that in our own backyards, unfortunately. Wayward migrations, in less severe forms than the vermilion flycatcher’s in this story, are happening beneath our noses. And those signals should be a call to cool the planet—for our sake and theirs.

A: I’m drawn to writers who immerse themselves into the natural world and illuminate it with their poetic imaginations. Rick Bass and Jim Harrison are writers I’ve always loved for how they do that. Karen Russell, and her Everglades-inspired magical realism, is a more recent writer I admire for similar reasons. I’m also drawn to writers who mine the depths of the human heart but, again, with sparse and imaginative prose—writers like Nicole Krauss, Milan Kundera, Haruki Murakami. And then there’re the writers whose styles are just so unique and immersive, I’m constantly rereading them—like Hemingway and J. D. Salinger.

Q: What inspired your focus on birds for this piece?

A: When I signed up as a volunteer for the Wildlife Rehabilitation Center, I signed up to work with mammals. But the Center had more need for help with songbirds—they were overwhelmed with orphaned fledglings at the time. So I said, “Okay—put me in that room, then.” And then I stayed there three summers.

When you spend that kind of intimate time with individual species—round the clock feedings and care—you get to see how amazingly unique the different personalities are within the same species. I got to know several dozen blue jays during that time, and each one was so distinctly unique—with their own habits, curiosities, and energies. That’s not an experience specific to birds. It’s any species. A friend of mine studied snails for several years in South Africa, and she’ll say the same about them. We’re all unique. We’re all sentient. And we all have our own secret lives and emotions. Each of us do. Animals no less or more than we.

Birds are unique in how they’re ever-present in our lives but also infinite mysteries to us. We understand so little about them, but anyone with a backyard or nearby park or even a line of telephone wire stretched across a back alley can daily witness these different universes we share our immediate world with land and sing and turn their heads and pierce the sky. They are whole new worlds to explore, beside us.

A: That’s so hard for me to answer directly because I tend to focus on questions more than answers. I write to find out what’s there. And then shape it into something that has its own life. My role is to create the thing and give it flight, not define it. It’s the same thing the character Daphne in my story is trying to do for the flycatcher—set it free to live its own life. So I’ll just say I hope readers find it moving and compelling and find their own meaning in it.

Maybe a better way to answer the question is to tell you what I find inspiring about writing about animals—and reading what others write about them. It gives me an opportunity to learn more about them and reflect on our unique relationships with them. We are all alone and together in this. We’re all part of the whole. Some of the most significant relationships in my life have been with animals. That’s not a reflection of my human relationships as much as it is a realization of the importance of animal lives to our own life experience and to our existence. We are bound to one another. We’re connected. The more we understand and protect the animal lives surrounding us, the stronger, safer, and more enriched we all are. At the heart of this anthology series is the opportunity to learn and share our experiences with the animal lives we’re lucky enough to share our planet with. I can’t think of a greater literary celebration—or any celebration—than that. I’m so happy to be part of it.

Kipp Wessel’s story, “Brasita de Fuego,” appears in Among Animals 3. Kipp loves animals, wilderness, and writing. His debut novel, First, You Swallow the Moon, is about heartbreak and grizzly bears. He earned a fiction fellowship and his MFA from the University of Montana. He’s taught fiction writing there, the Loft Literary Center, and elsewhere. He lives in Minnesota.