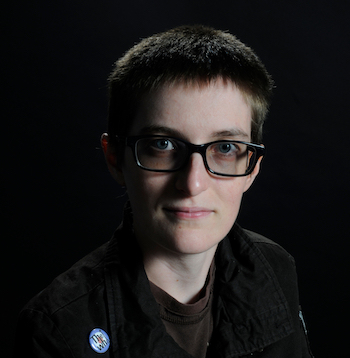 A: I was actually listening to the totally fabulous herpetology podcast SquaMates by Mark D. Scherz, Gabriel Ugueto, Hiral Naik, and Ethan Kocak, and in one of their early episodes they mentioned that axolotls can actually metamorphose when exposed to iodine. And that gave me this idea for a story—what if there was a salamander that could metamorphose into some kind of totally wild cryptid?

Q: Did you do a lot of scientific research when crafting this story?

A: You bet! That’s half the fun of this kind of story. I did a lot of reading about temnospondyls, the Permian amphibians that the monster is based on. Ethan was also kind enough to read the story and give me his herpetology thoughts. I hasten to add that all inaccuracies are mine and mine alone!

Q: Why did you choose salamanders for this piece?

A: To quote Marge Simpson, I just think they’re neat! Amphibians are a very ancient lineage of animals, and it’s fascinating to me that such tiny, fragile creatures have survived since before the time of the dinosaurs. But they’re also very vulnerable to pollution and climate change. We will need to take major steps to protect them if we want future generations to be able to appreciate these creatures.

Q: How do you view the role and responsibility of science journalism in shaping how people think about and act towards animals?

A: Science journalists have a huge responsibility! They play such a large role in shaping public perceptions about animals and nature. For example, most of the attention often goes to charismatic megafauna like lions and wolves. Smaller, less well-known animals, like amphibians, get less attention and therefore get less research and protection. It’s important that we protect the full range of biodiversity, not just the animals that people think are pretty or cool.

A: On the topic of science writing, I just love natural history writers who are always going out and crawling around in bogs and things and coming back with these wonderful stories. For instance, right now I’m reading Gathering Moss: A Natural and Cultural History of Mosses by Robin Wall Kimmerer. Who knew moss could be so fascinating?

A: I hope people will think about how we’re connected to the natural world, even us city dwellers who may not get to interact with nature very much. And I hope they’ll think about how even simple actions like retweeting a meme have an impact on the world around us, for better or for worse.

Gwen C. Katz’s story, “The Curious Case of the Cave Salamander,” appears in Among Animals 3. Gwen is an author, artist, game designer, and former mad scientist who lives in Pasadena, California, with her husband and assorted chickens and cats (but currently no salamanders). Her first novel, Among the Red Stars, is about Russia’s all-female bomber regiment known as the Night Witches.