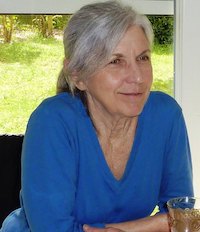 Q: There seems to be a reawakening in society to the middle ages and our relationships with animals then. Was this story based on a true story? What inspired you to tell this story?

A: Many years ago, I read John Julius Norwich’s book The Kingdom in the Sun about the Norman invasion in southern Italy. It drew me into the world of Frederick II and his mother, Constance, who traveled from Germany to Sicily, packing her worldly goods across the Alps on the backs of mules. The ass story was part of a longer piece that followed him through his infatuation with a white mule, who was carried out to sea with war horses sent to the Crusades.

Otranto was a city with links to an older time. When I was there, folk practices and superstitions were still in effect. A folk myth held that, in the summer, when a tarantula stung a woman, poisoning her so she went into a frenzy, only folk musicians could cure her by driving the poison out with the right music. The medieval setting gave me the opportunity to get distance on contemporary times. “Long ago” and “far away” in a story is another way of saying, “This is here and now.”

Q: Why did you choose the donkey to focus on in this piece?

A: In places abroad, I have seen very small donkeys cart tall stacks of firewood. Or carry large loads. Or large people. I’ve been struck by the difference of the small size of the animal and the heavy loads people impose on it. And the donkey bears it. How could it stand up under the weight? The ass was an emblem of a strong-willed but humble creature. My memory also brought up the classical story by Apuleius called The Golden Ass.

Q: Religion and superstition play an important role in the story. How do you see each of these affecting how people relate to animals?

A: In the Bible-based Christian religion, the allegory of the garden justifies the primacy of humans. Hunters believe it’s their god-given right to hunt, for reasons that go beyond subsistence. They hunt for the pleasure of killing. In addition to the privilege that power grants, humans have been known to punish animals for wrongs and offenses issuing out of animal behavior. In 1916, the town of Erwin, Tennessee, hanged a circus elephant after it killed the trainer—hired a few days before, and previously a bellhop—who jabbed it with a hook. Cats have been accused of being familiars, agents of the devil. Humans project their fears on animals and take action based on those fears. I think this fear is the human fear of mortality.

A: The writing process for me starts within. A feeling, a stirring, sometimes a discomfort. This feeling prompts me to look for something in the world to resonate with it. A place, a person, a situation, a book, a moment. Leo Tolstoy’s story “Kholstomer: The Story of a Horse,” which tells the life story of a horse from its point of view, planted the seed long ago. As a child I had been “horse crazy.” I rode hired horses at stables. I collected Breyer plastic horses. My lived experience—albeit decades old—added to what I read. My writing reflected the way these experiences came together, the way an electron, acquiring energy, can jump to a higher energy level in an atom.

A: A poem by Jude Nutter called “Horses” rendered the animal so beautifully I made a copy of the poem and carried it folded up in my coat pocket for many years. When I wanted a touchstone for beauty or serenity, I would take that poem out of my pocket and read it. It went from coat to purse to coat. I’ve already mentioned Tolstoy’s story, “Kholstomer.” Lately, I have been thinking about the human and nonhuman animal through Jacques Derrida’s essay, “The Animal That Therefore I Am.”

A: Poet Percy Bysshe Shelley said, “The great instrument of moral good is the imagination.” We use imagination when we try to see the world from another point of view. I hope the shift in point of view, by seeing the world from the perspective of a humble beast, will lead readers to imagine how life appears to other creatures around them.

Some readers have told me they see the ending of the story showing affection between Enzo and his ass. While there is that affection, there is also an irony at the end: The ass recognizes that Enzo has nothing in his hand for him. Ultimately, in any conflict of the human versus nonhuman animal, Enzo would defend the ass only up to a point. The ass knows it. A terrible pathos exists in the way humans cause animals to suffer, yet the animal continues to serve or return. Perhaps a question worth considering: What would it take for a human to stand up to another human to defend an animal? How much would anyone risk?

Marilyn Moriarty’s story, “Ass of Otranto,” appears in Among Animals 3. Marilyn is a professor of English and creative writing at Hollins University in Roanoke, Virginia. She is the author of the textbook Writing Science through Critical Thinking and the creative nonfiction book Moses Unchained. She has won prizes for her writing, and her essays and short stories have been published in a number of literary magazines.