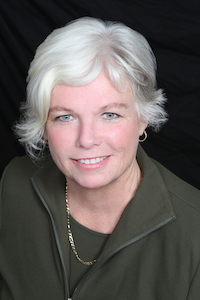 A: I’m a volunteer with NorCal Collie Rescue, and back in the summer of 2014, I got a call about two collies found in an isolated area of Plumas National Forest. They were wild, emaciated, and starving, but fortunately, the animal disaster group that initially picked them up called our rescue group so they wouldn’t wind up in an overcrowded animal shelter and possibly euthanized. At that time, the dogs were unable to walk on leashes without getting hopelessly tangled. On the way to my car, they snapped at the dry, desiccated thistle, trying to eat it. They were food-aggressive and fought each other over a dropped morsel. We never found out their true story, but they were assumed to be brothers. While both found loving, fantastic homes, that isn’t always the case when animals are abused or abandoned.

A: I knew the story I wanted to tell and how I wanted it to end. The first draft came easy, but with such a short piece, every word is important, so I spent a lot of time fiddling with it. I studied playwriting and am interested in voices acting as community commentary, and I shaped it toward that intent. I keep a collection of books and atlases by my writing desk so I can quickly find the tree or flower I might need for a story. It’s important to use the correct vegetation for a region and its elevation.

Q: Your story is very short but so effective—was it always meant to be a short piece, or did you realize this at some point during the writing?

A: I wrote it initially as a poem, and then switched it over, feeling it worked best as narrative. Short forms have the advantage of packing in sensory detail that evokes emotion. I could drill down into imagery.

A: I’m drawn to writers who evoke a deep sense of place. In the short story form, Flannery O’Connor has always been a model. She provides social commentary through the narrow mindset of her characters. I admire the poetry of Robert Wrigley. Poems reach us on such a primal level. Once, when reading a poem about a horse, I sobbed for half an hour, not knowing intellectually why, but feeling a universal grief within me.

Q: Why focus on dogs for this story?

A: I grew up with dogs. They have always been more than pets. They are companions. In addition to volunteering in rescue, I worked for veterinarians and in an animal hospital. I’ve seen animals neglected and abused, both intentionally and through ignorance. I wanted to write about how humans fail other sentient beings. Dogs and collies are my thing. Right now, I am sitting with two big furry dogs snoozing nearby.

A: The two collies found in the Plumas National Forest would not have survived if someone hadn’t reported seeing them. When people pass an animal in distress and assume someone else will stop or report the situation, it is more likely the next person won’t either. If people do not have the skills to help the animal at that moment, they can note the location and call the county animal control services as soon as possible.

Charlene Logan’s story, “Brothers,” appears in Among Animals 3. Charlene’s work has been published in West Marin Review, About Place Journal, Witness Magazine, Blackbird, Pembroke Magazine, and other magazines and journals. She received a writing fellowship from MacDowell and earned an MFA in playwriting from UC Davis. She is a volunteer with NorCal Collie Rescue.