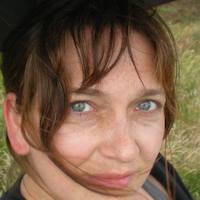 A: I’ve always been fascinated by old Westerns—everything from John Ford classics to Roy Rogers reruns. As a lifelong equestrian, I can’t help but focus on the horses in these films, even when they’re just background extras. You can really tell, based on the horses’ body language, which individual animals are enjoying themselves and which would rather not be there, which actors are good/bad riders, and so forth. If you know horses well, there’s a whole equine drama that runs parallel to the diegesis of Western films, constantly breaking the fourth wall. Because obviously, animals in movies don’t know they’re in a movie—for animal “actors,” whatever’s happening on screen is very, very real. That tension fascinates me. When I first watched the stunt in “One Trick Pony,” and saw the way the filmmakers recycled the footage to wring as much drama as they could out of that horse’s totally unnecessary, avoidable death, all for this terrible B movie … it haunted me to know that injustice was caught on film.

A: My friends all know that I’m obsessed with horses, film, and photography. A cinephile buddy of mine gave me a bootleg copy of Jesse James and mentioned how it was the film that led to supervision of animal action in Hollywood. From there, I did a deep dive into the internet, which is really a godsend for a historical fiction writer. So much primary source material has been digitized—film reviews, newspaper articles, photographs. It’s amazing what you can find if you know how to look. There are also a lot of terrific books about horses and horse trainers in film. Hollywood Hoofbeats is a nice overview for anyone interested. Of course, I also compulsively rewatched the stunt featured in the story. I’ve seen Jesse James in its entirety only twice—it’s such a bad movie! But I probably watched that scene more than a hundred times while writing “One Trick Pony,” rewinding, pausing, picking out details, paraphrasing dialogue, trying to read between the frames.

Q: You base your story on historical incidents in which Hollywood abused and killed animals to make their films. And you note that these animals were never given credits in the films they often sacrificed their lives for. Has Hollywood atoned for its sins by relying on digitally generated animals, or should it be doing more?

A: There have been several shockingly recent high-profile cases of animal abuse in the name of entertainment—I’m thinking of A Dog’s Purpose (2017) or Life of Pi (2012) in particular, but there have been other twenty-first-century instances of filmmakers mistreating animals on set. Abuse still happens, even under the watch of the American Humane Association, which has overseen “animal action” since Jesse James—there are quite a few instances where their “no animals were harmed” tagline has been proven false after the fact, and their standards are famously unclear. I think digitally generated animals can be an ethical solution, but real animals are still used in the creation of their CGI counterparts. And let’s be honest—we’re probably still decades away from truly convincing, photorealistic digital animals. Take Harrison Ford’s dog in The Call of the Wild (2020), for example. The unsettling “uncanny valley” effect applies to nonhuman CGI actors, too!

A: My all-time favorites are Richard Brautigan, Edgar Allan Poe, and Edith Wharton. In terms of writers working now, I admire John Haskell, Karen Russell, and Eric Puchner. Their work inspires me to take risks with form.

Q: Why did you choose horses to focus on in this piece?

A: As a “horse person,” I know horses very well, as a species and as individuals, and I get frustrated when the spectrum of what’s possible in “horse fiction” gets reduced to YA “horse girl” books, or Black Beauty, or Trollope’s hunting tales. Nowadays, owning a horse is perceived as a luxury. But for so much of America’s history, knowing how to ride, drive, and care for a horse was basic information for navigating the world, like knowing how to change a tire or charge a smartphone. There’s a pernicious cultural myth that the automobile came along and replaced the horse wholesale, but that shift happened way more gradually than we realize. It wasn’t unheard of, well into the 1930s, to see horses and cars sharing roads. Horses are mankind’s forgotten “best friend,” I think. So I think of my “horse stories” as epitaphs for individual horses, but also as more general eulogies for a lost partnership, a lost sense of mutual respect.

A: I hope “One Trick Pony” invites readers to consider the ethics of animal action in film, and the role of consent in our relationships with animals, in general. Just because we can make an animal do something, with our “superior” intellect and opposable thumbs, doesn’t mean it’s right—especially when we’re only doing it for “entertainment.”

J. Bowers’s story, “One Trick Pony,” appears in Among Animals 3. J. Bowers has published fiction in national journals, including StoryQuarterly, The Indiana Review, and Guesthouse. A three-time Pushcart Prize nominee, Bowers won The Laurel Review’s 2014 Midwest Short Fiction Prize and the 2016 Winter Anthology Prize. She is an assistant professor of English at Maryville University in St. Louis, Missouri.