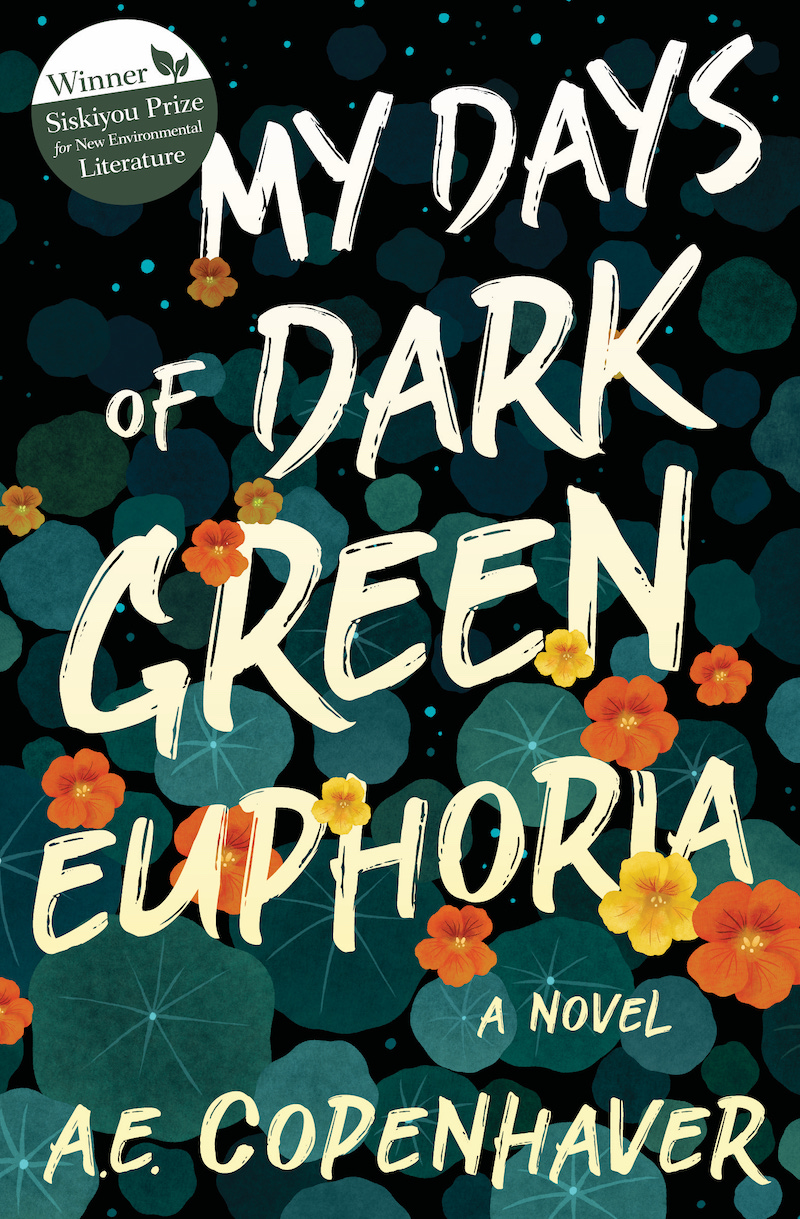 We are delighted to reveal the gorgeous cover of A.E. Copenhaver’s novel, MY DAYS OF DARK GREEN EUPHORIA, coming February 1, 2022.

This stunning cover was designed by Matt Smith, with the illustration, Nasturtium Garden, by Lea Yunk.

Winner of the Siskiyou Prize for New Environmental Literature, this satirical novel follows thirtysomething Cara Foster, “a provocative and delightful presence” (Carol J. Adams, author of The Sexual Politics of Meat). Cara is, one might say, eco-anxious—perhaps even eco-neurotic. She eats out of dumpsters (not because she wants to but because it’s the right thing to do), does laundry as seldom as possible, takes navy showers every couple of days, and is reevaluating her boyfriend for killing a spider. Cara has never met her six (soon to be seven) nephews and nieces because she doesn’t fly domestic (unless it’s an emergency) or international (ever). She longs for a carbon footprint so light you’d hardly know she exists.

Then, during a mimosa-soaked brunch, Cara meets her boyfriend’s alluring mother, Millie, and finds herself mesmerized by Millie’s extravagance: She eats meat, drives a car the size of a small yacht, and blithely travels the world without any guilt whatsoever. As the two begin spending time together, getting pedicures and drinking sixteen-olive martinis, Cara becomes hooked on this new freedom from the harsh realities of twenty-first century life. Yet before long, her career, her best friend, and her identity hang in the balance as she struggles to disentangle herself from the intoxicating extravagance of Millie’s world.

“From the very start, this novel is captivating and takes you places you don’t see coming. The 30-something female hero is unlike anyone else you’ve met in fiction, and the darkly hilarious story is ultimately enlightening.” — Robin Raven, author of The Kindness Workbook

“Awareness of ecocide, environmental devastation, and animal suffering might not seem the likely content for a madcap adventure. That was before My Days of Dark Green Euphoria.” — Carol J. Adams, author of The Sexual Politics of Meat

“My Days of Dark Green Euphoria encapsulates better than any other novel I’ve read the struggles faced by people living on Earth at this very moment in history. While few of us go to such extremes as the protagonist Cara Foster, anyone who cares about the planet will no doubt see themselves reflected in her.” — Wendy Werneth, author of Veggie Planet and founder of The Nomadic Vegan