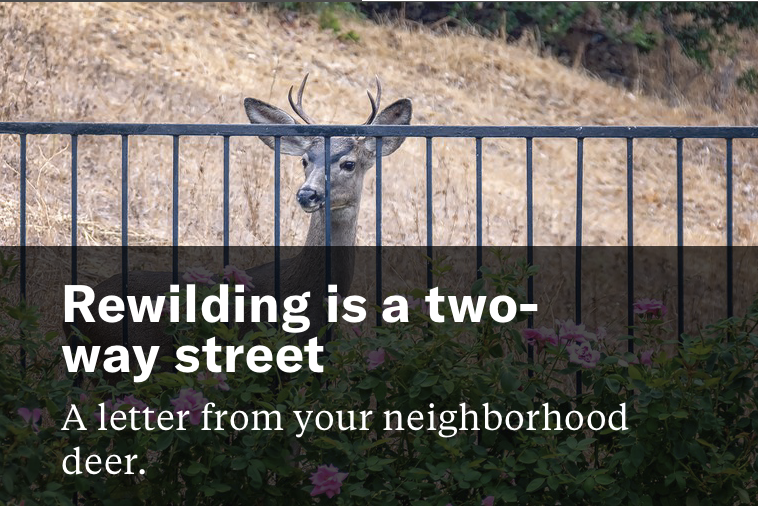 Writing for Animals editor John Yunker recently transcribed a letter from an American deer (who could, in fact, be someone who lives in your own neighborhood — or perhaps you live among bears or elk or other wildlife). The letter, recently published in High Country News, highlights the issues surrounding human-wildlife interaction, especially in this (sort of) post-pandemic landscape.

You’d probably rather forget the past year. But we’ve had a very different experience: Roads that were once perilous to cross became pleasantly quiet. A surge in home gardening left us plenty of new rosebushes and other edibles to feast upon in the early hours of the morning. And during the day, we got to know many new and friendly faces, seen through the windows and on the porches of previously empty homes. We were starting to hope that this might become the new normal: more food and fewer cars.

This summer — with climate chaos from flooding to wildfires, as well as humans returning to most normal activities — we have to reconsider once again our relationship with our more wild fellow animals. This letter highlights the conflicts among humans and nonhumans, and asks us humans to reconsider our position, and to do a bit better.

You see, we members of the urban wildlife community have long found ourselves at odds with humans. You need look no further than the media to see reports of conflicts across the country. Just in the past year alone, coyotes have “terrorized” residents of San Jose. Peacocks are “ruffling feathers” across Los Angeles. And wild turkeys have “overrun” Spokane and other towns across the Pacific Northwest.

And writers are among those who can help show the way. At Ashland Creek Press, we believe that literary activism is among the important and myriad ways we humans can help animals; this letter itself is among the examples in Writing for Animals. From Writing for Animals to Saving Animals to the Among Animals series, we hope writers who love animals believe that literature has an important role to play in raising awareness of and compassion for the animals who surround us. It was their world first, and we want to share it so that it remains theirs for generations to come.

Check out Writing for Animals as well as High Country News to learn more.