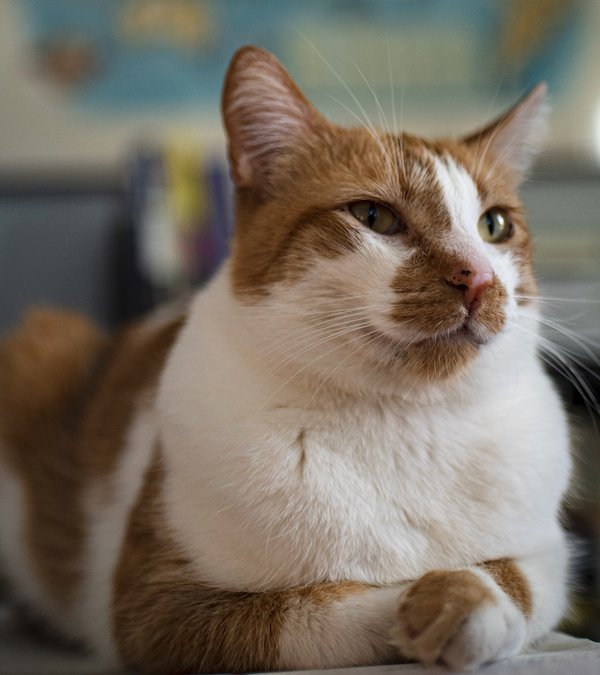 I read once that The New York Times keeps between 1,600 and 1,700 “advance obits” on hand at any given time. Obituaries at the ready, waiting for their respective subjects to require them.

Perhaps I should have begun preparing an obituary for Harlan the day we adopted him nearly three years ago.

Harlan was FIV positive. Which is to say, living on borrowed time.

Feline immunodeficiency virus (FIV) is a slow-acting disease seen among stray cats, transmitted by bites, and generally viewed as an early death sentence. A common cold can be lethal. It was not unusual to find shelters euthanizing cats just a few years ago based purely on this diagnosis.

But when Harlan arrived in our home and promptly jumped on top of a bookcase I didn’t think any cat could summit, when he howled to go outside every moment of the day, and when he never seemed to sleep more than an hour at a time, it was easy to forget that he was fragile.

Harlan had so much energy that we adopted two more cats because we thought he needed friends. I also began taking him for walks on a harness and leash.

Two walks, then three, until we averaged five walks a day. You’d think I’d have gotten into amazing shape, but walking a cat is not like walking a dog. For Harlan, it consisted of mostly standing near a fence and waiting for the neighbor cat to show her whiskers. We’d pass a few houses down the street, stopping at fences and gates that Harlan knew cats frequented. I got to know the neighbors, and they got to know that strange man and his cat.

We knew there might be risks to taking an FIV-positive cat outside. But Harlan was a street cat, and he could not understand why we confined him to our home. Nobody should let an FIV cat roam wild outside, with the risk of fighting and infecting other cats. But Harlan and I compromised on a harness and leash and an hour or two a day spent patrolling his domain.

Six months ago, we noticed signs. He had days when he was lethargic, but he always bounced back. His leg swelled up one day. Then his neck, to the point where he couldn’t swallow. But our wonderful vet was persistent and a bit curious. Anti-inflammatories got the swelling down. Antibiotics got him back to his walks. Words like Baytril and Prednisone entered our language. Every time, Harlan recovered and regained his energy, his demands for walks, and his signature playfulness, which manifested in racing around the house, chasing toys, and pouncing on his feline brothers.

Still, we made more than a dozen trips to the vet over these past six months. We told ourselves we’d do nothing heroic. These visits were about hydration, blood work, getting him back to a sort of normal. We already knew there was no cure. In the end, all we could do is give him enough steroids and antibiotics to slow whatever was eating him up from inside.

And there were so many great days, days when I once again forgot about those three horrible letters. Looking back, he was much nicer in his final months, probably because he was not feeling well. He often sat on my lap, and he was not a lap cat. He snuggled in with us at night, and he wasn’t a snuggler.

He was also never a cat that purred beyond a whisper, and yet his purring became loud and constant, as if he knew he’d been given more time and was thrilled about it.

How do you know when it’s time? How many lives did Harlan have left? I will never know. But I know that we decided on January 6, after a particularly brutal episode and a more dire diagnosis than ever, that he had suffered enough.

In that little white room at the vet’s, trying to not to hyperventilate under our COVID masks, we said goodbye to Harlan.

If you have an opportunity to adopt an FIV cat, brace yourself. Put some money aside for vet visits. But don’t let the fear of an early death stop you. It’s worth it.

Because we would do it all over again. Eagerly.

I will never know exactly how old Harlan was when he died. Where he came from. What his life was like before we found him. The disease may have won the war, but Harlan won a million battles along the way. Looking back, I think part of his manic energy was about living every minute to the fullest. Good advice for those of us left behind.

What would Harlan’s obituary say had I written that day he walked straight into our carrier, as if he knew he was on his way home at last?

5 thoughts on “Goodbye to Harlan”