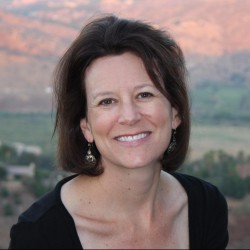 We are delighted to introduce you to author Katy Yocom and her gorgeous novel, Three Ways to Disappear, winner of the 2016 Siskiyou Prize for New Environmental Literature (it was also a finalist for the Dzanc Books Disquiet Open Borders Book Prize and the UNO Press Publishing Lab Prize).

Foreword Reviews calls the novel “immersive and multi-layered” and “informative [and] refreshingly complex,” and bestselling author Elizabeth George writes, “For her debut novel, Katy Yocom has created a wonderful piece of environmental fiction.” As Sy Montgomery (author of The Soul of an Octopus and The Good Good Pig), writes, “The drama feels absolutely real. And the urgency of the book’s message has never been greater.” Read on to learn more about the novel in our interview with Katy.

Q: How did you come up with the idea for the book?

A: A few years ago, a tigress at the Louisville Zoo (our local, AZA-accredited zoo) had a litter of cubs. I immediately fell in love with them and became maybe a little obsessed. I visited them weekly, but I always felt my tiger obsession was slightly embarrassing. At the same time, I was hungering to write a novel. I kept thinking, “Katy, you can’t write a novel about tigers” … until one day a friend told me: “You know, actually, you can.” Two days later, I was on my deck, planting impatiens, and the first line of the novel came to me. I kept planting. And then the second line came, and I set down my gardening spade and raced inside to my computer. An hour later, I had a beginning and a good idea of the arc of the entire novel. Although the story evolved as I wrote succeeding drafts, I always knew I wanted to tell the story of a woman who travels to India wanting to do good in the world and discovering the realities that complicate that seemingly simple desire.

Q: How long did it take you to write Three Ways to Disappear? Did you have a special routine or place in which you wrote?

A: It took me about a year and a half from first idea to write a complete draft of the story. I finished that first draft at a writing residency at the Kimmel Harding Nelson Center for the Arts in Nebraska City, Nebraska—an organization to which I owe huge thanks.

Over the years I spent drafting and then revising this book, I spent more writing days than I can count at Hopscotch House, a retreat center run by the Kentucky Foundation for Women. I took retreats everywhere I could. Of course, life demanded that I hold down a job, and I couldn’t spend all my vacation time on writing retreats. So, many days, I got up before dawn so I could spend an hour or two writing before work. To be honest, I think the daily writing—tiring though it was—was its own kind of magic. When you’re writing every day, your imagination keeps working on the story even when you’re not consciously aware of it. When that happens, great leaps of progress are possible.

Q: What research did you do in order to write this book?

A: After I had the initial idea, I quickly realized there was no way I could write this novel without traveling to India. I spent three weeks there visiting tiger preserves, including a week at Ranthambore, where the novel is set, and another week at Kanha. I even traveled into the Sundarbans, where tiger sightings are extremely rare, and managed to see two wild tigers there! It was a stunning experience—truly the trip of a lifetime. I never imagined I’d be lucky enough to see tigers living in the wild in some of the most beautiful spots on earth. One of the best things about that trip is that my mother came with me for the first ten days, including the Ranthambore part of the journey. Mom initially was reluctant to make the trip, but once we got there, the natural beauty of the national parks won her over.

Q: How does the theme of family permeate the story, both for humans and animals?

A: I wanted to show family relationships through the lens of two sisters and their family of origin, but also through Quinn’s own husband and children, and through Sarah’s relationships and how they might or might not approach the intimacy of true family. And then, of course, there’s the tiger family in the book—a mother and her two cubs, and even the father. In tiger families, it’s generally understood that the father is not involved, but that’s not necessarily 100 percent true. By showing the lives of the tigers in counterpoint to the lives of the humans, I hoped to highlight some of the truly universal themes of filial love and care as it plays out between generations in a family.

Q: Although you started with the tigers, this is essentially a family story, a sister story?

A: Yes. My two main characters are American sisters who spent their childhood in India. After their brother’s death at age seven changed the course of their lives, they took different paths and grew increasingly apart. One sister is more inward-facing. She chose a settled life focused on her art and her family in Louisville, Kentucky, the city where she’s lived since she was eleven years old. The other sister, Sarah, has spent her adult life as a journalist who travels the world. She’s more outward-facing, more concerned with the inequities and injustices she sees everywhere she goes. At the beginning of the novel, she decides that if she wants to make a difference in the world, she needs to leave journalism and dedicate herself to one cause. The cause she chooses is tiger conservation, which coincidentally (or not) happens to take her back to the country where her family fell apart, and where a few mysteries remain that she’d like to resolve. Without giving too much away, it’s Sarah’s return to India that allows the sisters to begin to reconnect with each other at last.

Q: What did you find when you started researching tigers and conservation?

A: I learned so much! Sadly, I learned about the bloody history of human-tiger interactions and the grave danger that the tiger is in due to human population growth, poaching, and habitat loss. I also learned about the important work being done by governments, NGOs, scientists, and heroic individuals who’ve dedicated their lives to this cause. Although tiger numbers are rebounding now, at the time I began my research, things looked very grim indeed. Just a few decades ago, there was serious speculation that tigers in the wild might be extinct by the end of the millennium. Fortunately, that’s not the case, but the current good news is unfortunately not a reason to relax. The numbers are on the rise now precisely because people are paying attention and dedicating resources to the cause. If that goes away, we’re right back to a downward spiral.

Q: What was it like traveling to India to research this book?

A: It was amazing! India is vibrant unlike any other place I’ve ever traveled. Everything seemed more intense there, from the population density to the multitude of colors and sounds to the traffic in the streets. Once we left the cities and got out into the relatively wide-open spaces of the national parks, it still felt intense, in a different way. The beauty of the landscape, the variety of flora and fauna, the life-and-death dramas being played out every minute among the animals. At Ranthambore especially, it was stunning to see the spectacular landscape dotted with these ancient structures, from an enormous clifftop fortress to a sweet little summer palace built a thousand years ago. And against that backdrop, wild animals living and hunting and giving birth and doing what it takes to survive in the wild. Time seemed to collapse. I find myself thinking about the experience in terms of lenses — telescopic ones that reduce distance and time, and kaleidoscopic ones that amplify the swirl of life.

My travels in India affected every page of the India chapters of the book. The main effect had to do with being immersed in the natural landscape of the national parks, and witnessing the activities of tigers and other animals living free. But beyond those influences, which were the reason I took the trip, were all the side trips and conversations and things I observed that I had no idea would affect the course of the story. I visited the home of a wildlife veterinarian, and he showed up in the pages of the book. I visited villages that are located within tiger territory, and they turned out to play a central role in the story. I visited a regional hospital, and, lo and behold, it turned up in the story, too. The food I ate, passing street scenes — I feel like it all filtered through my senses and came out my fingers into the pages of the book.

Q: What do you hope readers will take away from this book?

To learn more and to purchase Three Ways to Disappear, click here. For another interview with Katy — with Prathap Nair of Firstpost India — click here. You can learn more about Katy here and here. And for information on Katy’s upcoming book events, click here.