Marybeth Holleman’s essay “Other Nations” appears in Writing for Animals.

A: It’s become more challenging, and more interesting. The more I learn and experience the more-than-human world, the more I see the need, as a writer, to be a conduit for them — for my writing to speak for them, in some way. This became very clear to me following the 1989 Exxon Valdez oil spill in Prince William Sound. This was a terrible industrial disaster that took thousands of wild lives, threatened generations more, and permanently degraded a huge swath of coastal wilderness. I witnessed the way humanity considered this disaster as compared to a disaster in which it was human lives that were lost. I realized then that the best I could do was try to give voice to these nonhuman lives, as best I can and in full awareness of the filters I carry as a human.

It’s very challenging, for they’re not like us, and yet, in ways, they are…how to write that? Not by being overly anthropomorphic, which is a disservice to other animals’ true selves, but also not by being anthropocentric, which is also a disservice and a lie. They are not, regardless of the unfortunate legacy of Descartian thinking, mere machines. And it’s fascinating, as a writer, to lean in on that, to step beyond the convenience of either/or thinking, to question pat answers, and to really witness the truths of their lives. In early June on the Kenai River, my husband and I watched salmon jump. Why, I asked my biologist husband, do salmon jump out of the water? He starting to recite theories – to loosen the eggs, to rid of parasites…Well, we don’t really know. And I love that; I love that we don’t always have some clear and constant explanation for what another being is doing. The salmon jumping: What if it’s just for fun, or just for the rush? What if there’s no reason at all, except joy?

A: Balance. Standing in the middle. Embracing both/and rather than seeing things as either/or. We wield great power when we write about nonhuman lives; it’s easy for stories about animals to be dismissed as overly romantic or anthropomorphic or complete fantasy. If we want our stories to reach as many people as possible, we must be prepared to straddle beauty and terror, loss and life, differences and similarities. We have to balance our own humility and authority.

Humility. We must remember that our human knowledge will always be limited, regardless of how deeply we try to understand other lives. They are, as Henry Beston wrote, “not brethren, not underlings: they are other nations, caught with ourselves in the net of life and time, fellow prisoners of the splendour and travail of the earth.” For example, just because I’ve published a book about wolves doesn’t mean I know wolves. Even if I spent years living with wolves, even then, I would not claim to know what it’s like to be a wolf. In fact, what I’ve found to be true in writing about the more-than-human world is that the more I learn, the more I see how little I know. How little all humans know.

Authority. We must root our writing in unmediated experience. Spend time with the animals we’re writing about; write about what we actually see, hear, smell, feel. Do tons of research, read all the scientific information we can, but be sure to root our words in direct, actual experience. Then embrace the authority of our own experience and knowledge. In The Heart of the Sound, I described watching a mountain goat swim from Culross Island to the mainland. Scientists later told me there were no goats on Culross Island, and goats do not swim in saltwater. But I know what I saw. And I know, from that, that as much as science can teach us about the world, it is always —always — an incomplete picture.

A: Ursula LeGuin’s short story “The Author of the Acacia Seeds.” Yes, it’s science fiction, and fantastical, but it makes you think about language among nonhumans in a different light. It translates to reality. Then there’s Gretchen Primack’s poetry collection Kind, and Lisa Courturier’s amazing essay collection The Hopes of Snakes and lovely poetry collection Animals/Bodies. Nancy Lord has a great short story on a wolf-dog called “Recall of the Wild.” And there’s Annie Dillard’s “Living Like Weasels,” which is a brilliant description of one of those brief moments of unmediated connection with the nonhuman world.

Q: You rerouted your career from environmental policy work to creative writing. In what ways do you feel this is more effective and/or rewarding?

A: Oh, so much more rewarding! Effective in a longer-lasting way. Policy can be undone quickly, as we’re seeing right now with many regulations that took decades to put in place. We’d like to think policy is done with a rational, reasoned, careful approach, but it’s just not. When I began work in environmental policy, I learned fast that the problem wasn’t, as I’d naively assumed as a college student, some lack of information transmittal, some failure of communication between scientists and politicians. No, it’s a fundamental difference in intention and values and process. The political realm, in its present form, is fraught with poor decisions with no basis in scientific knowledge or rational thinking…much less the kind of both/and openness that I spoke of above. For example, here in Alaska, the state put in place a no-kill buffer for wolf protection along the boundary of Denali National Park…and then took it away simply out of spite over an unrelated political spat.

Writing, on the other hand, lasts. We still read stories — unabridged, unmediated — that are hundreds of years old. Writing can reach people on a deeper level, a subtle plane, one they may not even consciously recognize. Story bypasses the analytical mind and aims straight for memory and imagination. Story has power; it makes people more empathetic, more able to enter the world of the Other. It is transcendent in its potential to effect change.

The downside is that, with policy work, you can see the effects of your work — whether success or failure — very clearly and sometimes quickly. When they put the wildlife buffer in place, wolves stopped being killed, and more wolves were seen in the park. With writing, you can’t, for the most part, see the effects. There are exceptions, of course: consider Silent Spring. But mostly we writers, and really, all artists, rarely witness any far-reaching effects from our work. Every now and then I’ll get a note from some reader that confirms what I’ve hoped — that my work is reaching people, is having an effect on their view of the world. But mostly I just have to have faith in what I cannot, and likely will never, see—in the ripple effect of my words as they find their way out into the world. 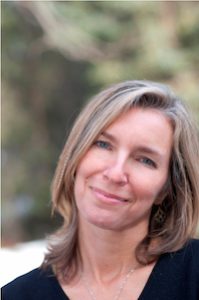 Marybeth Holleman is the author of The Heart of the Sound, co-author of Among Wolves, and co-editor of Crosscurrents North. A Pushcart-Prize nominee, her essays, poems, and articles have appeared in dozens of journals, magazines, and anthologies, among them Orion, Christian Science Monitor, Sierra, Literary Mama, North American Review, AQR, and The Future of Nature, as well as on National Public Radio. Holleman has taught creative writing and women’s studies at the University of Alaska and has written for nonprofits on environmental issues from polar bears to oil spills. A North Carolina transplant, she has lived in Alaska for more than twenty-five years.