A: I am primarily a genre writer — fantasy and science fiction — and my early work was pre-vegan. I didn’t always include meat eating or animal use in those stories; I didn’t  really think about it one way or another. As my understanding of veganism and its impact grew, I was able to use that knowledge to shape stories, and now I find it difficult to include meat-eating, hunting, and animal usage in my writing.

Genre lends itself splendidly to exploring all aspects of veganism, from the impact on the environment and on the human slaughterhouse workers to the sentience of animals, the physical impact to the body from eating animals, and the unsustainability of raising animals for food. My fantasy writing tends to focus more on the physical and emotional damage to humans and animals, my science fiction on the damage to the environment and impracticality of the current meat-based food system.

A: “Tell a good story.” If you don’t write a compelling tale with memorable characters, no one will want to read it anyway, and your message and insights will be lost to the audience. This doesn’t mean that vegan values and information have to take a backseat, but the story and characters need room to become what they must. Character motivation, tension, and desire drive the story; all the vegan information you want to give your reader will come, and that illumination is the inevitable result of these characters and situations that you’ve created playing out in their own time and pace.

A: I was riveted by Karen Joy Fowler’s We Are All Completely Beside Ourselves. The narrator, Rosemary, is human but we feel the depth of her love and loss. In addition, I have to mention Richard Adams. His books Watership Down and The Plague Dogs touched me deeply. He was a master storyteller.

Q: Your essay addresses the very essential aspect of what fictional characters eat and how to portray this authentically. What authors/books do you most admire for their portrayals of vegan characters?

A: First, there are not enough vegan characters out there! Many novels have vegetarian characters — the Eargon series by Christopher Paolini is a popular example. I also love Ruth Ozeki’s work. But E.D.E Bell’s Spireseeker is a great example of fantasy novel with a true vegan character — main character, even! Beryl is an elf, and in Bell’s universe, elves are vegan. Animal agency and sentience are explored as the novel unfolds, and because veganism is a core part of the elven culture and identity, it comes up again and again as Beryl navigates the world around her. 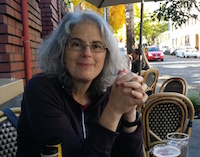 Beth Lyons is a former English literature teacher, award-winning poet, and traveler who now lives and writes in Portland, Oregon. She is the author of three fantasy novels and three science fiction novellas, all available via Amazon Kindle. In addition, she is a fiction editor, teaches workshops on editing and creative writing, and currently moderates an online writing forum.