Braving the Italian Mafia to tell an incredible story

Roger Thompson and No Word for Wilderness

Nearly a decade ago, Roger Thompson was on the border of the Banff National Park, hiking a remote section amidst towering peaks and endless wilderness, tracking bears. Although it may sound exotic to most, for Roger it was a simple excursion. But when he learned about the rarest bears on Earth, just fifty miles from Rome, it began a nine-year journey, one that led him to mafia scares, relentless research, sleepless nights — and finally, the publication of No Word for Wilderness: Italy’s Grizzlies and the Race to Save the Rarest Bears on Earth. 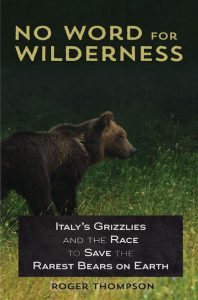 Currently a professor of rhetoric and the director of writing at Stony Brook University, Thompson is far from a bear expert, yet he found a passion for Italian grizzlies and is now on a national book tour promoting his new book, which released May 1. No Word for Wilderness tells the story of two populations of bears, both of which have been devastated from habitat destruction, illegal hunting, and poisoning. The book outlines the journey of their survival at the hands of park directors, environmentalists, scientists, angry farmers, and the Italian mafia. Now, there are fewer than fifty Abruzzo bears in existence — and yet this is largely unknown and rarely talked about. When Thompson heard about this that day in Banff from fellow hiker Vladmira Lackova, he said, “It was totally incredulous. I didn’t believe her.”

Not long after, he hopped on a flight to Italy and met up with Italian photographer Bruno D’Amicis. Although they had never met before, D’Amicis picked him up from the train station and took him to the park in Abruzzo to confirm what he couldn’t believe: There are grizzlies in Italy, and the mafia is under suspicion of eliminating them.

This fact alone urged Thompson to write the book. It’s not his first professional accomplishment, however: In addition to academic writing, his award-winning publications include a bestselling Iraq War memoir. He is also the senior editor of Don’t Take Pictures magazine, and his writing appears in many academic and non-academic journals. He taught English and fine arts at the Virginia Military Institute for fourteen years and directed an environmental research program in Banff, AB. He received his PhD in Rhetoric and American Literature from Texas Christian University, and his master’s and bachelor’s degrees in English from Baylor University. Additionally, he conducted cross-disciplinary research during a fellowship at Harvard University, and his teaching has been recognized with several awards and grants. His busy schedule didn’t sway him from continuing the book.

“It’s been a rough time balancing everything,” he said. In the process of writing the book, the university went through major drawbacks, forcing him to fire half of his staff. He also had his family to consider. “I always have a goal to turn everything in early,” he said, valuing time for revision while keeping publishers at ease. Although Thompson lives in Long Island, NY, he connected with Ashland Creek Press, a boutique publisher based out of Ashland, Oregon, that focuses on environmental literature. They were excited about Thompson’s book because it was a gripping story yet to be told. “But with Ashland Creek, they had to wait,” he continued, “I handed the manuscript in late which drove me crazy. I lost sleep over it.” Despite the late deadlines, both Thompson and Ashland Creek Press were pleased with the outcome.

Other obstacles included language barriers, a lack in scientific knowledge, and the mafia.  “As an American who doesn’t speak Italian, I felt hobbled,” said Thompson. While attempting to conduct interviews in Italy, he felt a level of discomfort between him and Italians who struggled with speaking English. Most Italians he spoke with, though, had enough English competency to have a productive conversation.

In regard to the sciences, he stated, “I’m aware that there’s a fair criticism there in terms of how much access I had. I’m not a biologist, but I think it’s important people talk across their areas of experience. We should try and understand different parts of the world.”

While stepping into a field in which he had no academic background, he also walked into dangerous mafia territory. The Italian mafia is an active force near Abruzzo National Park, and there’s reason to believe they are killing the bears. Former Nebrodi National Park Park Director Guisseppe Antoci of Sicily nearly escaped death once from an attempted assassination and is under high levels of security because of his environmental stance towards the park. While Thompson was on his way to Rome to speak with Antoci after he was run out of office, two Slovakian journalists were murdered in their hometown after an interview with Antoci. Just before that, two of Antoci’s bodyguards died under suspicious conditions. Thompson felt relieved when Antoci had to reschedule because of funerals he had to attend.

In the beginning stages, Thompson didn’t believe the mafia had anything to do with the bears. But after speaking with people in the park and creating a map of mafia arrests around the area, he had no other explanation. “I don’t know how anyone can contest it. If you look at this map and the nature of their involvement in the park, you can’t deny it.”

With that in mind, he took measures to protect himself. “I used a friend who works for the justice department as a resource and asked if anybody needs to know what I’m doing. I didn’t want to be an idiot writer who interviewed a mafia target.” After their conversation he followed through with his interview and the book carried on.

Tension between groups is as high as ever, and the number of bears is still declining. With the publication of No Word for Wilderness, Thompson hopes to motivate people to act. “I’m not the person who can get on the ground there and do the things that need to be done. There needs to be some sort of international face to this that can really bring pressure to it,” he said.

Already, word is spreading about No Word for Wilderness, and it’s gaining traction throughout the U.S. and Italy. The book is available for purchase at all major bookselling websites, including Amazon, Barnes and Noble, Google Play and iTunes, and can be ordered through any independent bookstore.

Thompson’s work doesn’t stop here. After his book tour, he plans on get more involved with understanding the problematic side of the tar sands oil industry in Alberta, Canada, and start co-writing the book in the fall. He also has and endless list of novel ideas, and is never opposed to picking up a new story that he finds interesting.

Elizabeth Raynal graduated from Southern Oregon University with degrees in English and Outdoor Adventure Leadership. Her pursuit to be an environmental writer and editor reflects in her publication with the Mail Tribune and success in receiving a grant for the Siskiyou Mountain Club. Her work also appears on Literary Ashland. When she is not writing or studying, she can be found on a mountain with her ice axe or working as a part-time mechanic for the University.