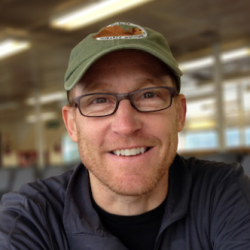 One of the many reasons for Amazon’s success with the Kindle has been the fact that you can buy a book for the Kindle but read it on many different devices, such as the Android, iPad, and iPhone. All you need to do is download apps for these devices and log in to your account.

But what if you don’t have one of these devices? What if you just want to read your book on your old-fashioned computer screen using your web browser?

Amazon has a solution for that as well — the Cloud Reader.

Using Chrome or Safari (Mac or PC) go to http://read.amazon.com. 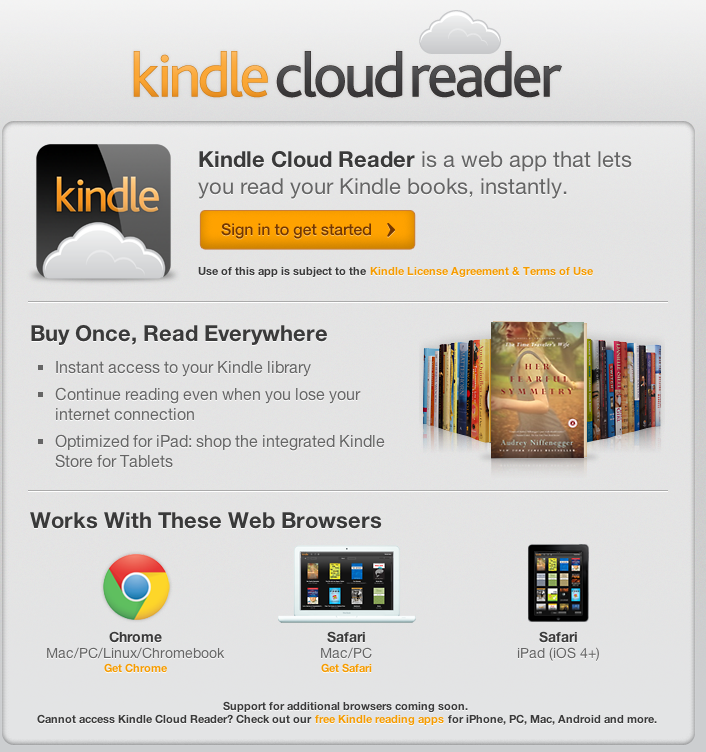 You’ll notice that this intro screen stresses that the Cloud Reader is optimized for the iPad, which might seem peculiar since Amazon also offers a Kindle App for the iPad. There’s a reason for this, which I’ll explain in a moment. But let’s just focus on your PC web browser first, as there are two points worth highlighting.

Once you click the “get started” button, you’ll be notified that the Cloud Reader works offline as well. This is a very cool feature and means that your browser will cache copies of your books onto your computer so you don’t need an Internet connection to read them. And, yes, this also works on the iPad. 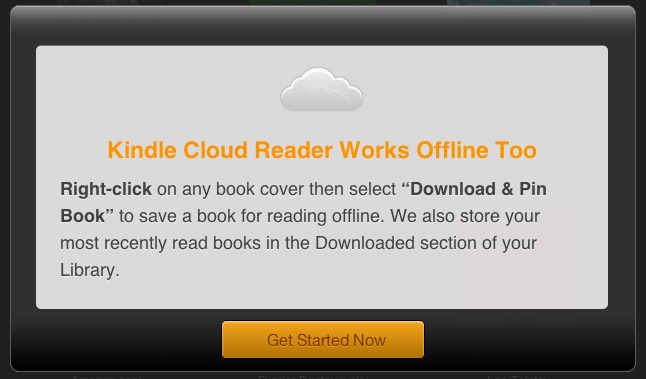 After you click through this screen, you’ll be asked to log in — and then you’ll see the books that you’ve purchased:

These books are synced to your Kindle and any device-specific Kindle apps. So if you read to page 100 on a book here and switch to your iPad app, you can pick up at page 100. Another great feature.

What Amazon is doing here with the Cloud Reader isn’t just a generous gesture for those folks out there who want to read on their PCs. The purpose of the Cloud Reader is to bypass Apple’s app store. But before I get into that, I want to explain the difference between a web app and a native app.

A web app is like a web site. It’s anything that you access via your web browser, like the Cloud Reader. A native app, on the other hand, is anything that is device-specific, like an app purchased over the Apple App store or Google’s Android store. These are applications developed specifically for a device. Native apps are generally considered superior to web apps because they open faster and can take advantage of all the benefits of the device’s operating system. Web apps, because they live in a web browser, just don’t feel as responsive overall — though this “offline” reading feature of the Cloud Reader marks one bold attempt to change that.

Finally, I should note that people LOVE apps, particularly if they’re free. And there’s something to be said for having an icon on your iPhone that you can access with one click (rather than inputting a long URL). I’m not sure that most people know that they can bookmark web apps on their iPhones and iPads to create “app like” icons on their home screens.

So for now, users prefer native apps to web apps.

Which brings me back to Amazon. If users prefer native apps, and Amazon already offers a native Kindle app, why did Amazon go to the trouble of launching a web app?

Because six months ago, Apple changed the way it operates its app store. It told Amazon and others that if you were going to have a link in your app to your store, you’d have to give Apple 30% of any revenues from any sales that comes through people clicking on that link.

So what did Amazon do? It removed the Kindle store link from its native Kindle app.

But if you go to the Cloud Reader web app, you’ll see, in the upper right corner, a link to the Kindle store.

Which brings me back to the iPad. Let’s say you’ve been happily using the Kindle app for the iPad, and you recently noticed that the Kindle store button went missing. Well, now you can get it back by going to your web browser and navigating to the Cloud Reader.

The experience isn’t as good as the native app, but it’s not bad.

And I’ll give Amazon a great deal of credit for trying to maintain a positive user experience in the face of Apple’s unfortunate behavior. I say “unfortunate” because the Apple iBookstore is nowhere near as sophisticated as the Amazon Kindle store. I would rather have seen Apple innovate with its store and compete with Amazon than simply block the Kindle store altogether. I understand why Apple did what it did, but the users — that is, us readers — suffer because Apple has not worked hard enough to be competitive with Amazon.