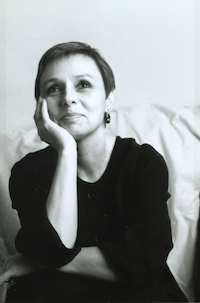 Gwyn Hyman Rubio is the bestselling author of Icy Sparks, a Barnes & Noble Discover Great New Writers selection and a 1998 New York Times Notable Book. A national bestseller, the novel was praised as “vivid and unforgettable” (New York Times Book Review) and “a combination of fire and ice that will take your breath away” (Atlanta Journal-Constitution). Her second novel, The Woodsman’s Daughter, was published in 2005 and applauded as “richly atmospheric and engrossing” (Atlanta Journal-Constitution) and “set in a world wondrously created and mastered” (Louisville Courier-Journal). A Book Sense Pick by the independent bookstores of America, it was nominated for the PEN/Faulkner Award, was the finalist for the Kentucky Literary Award, and was listed as one of the ten best books of the year by the Louisville Courier-Journal.

Gwyn’s work has been nominated for a Pushcart Press Editors’ Book Award and has appeared in literary magazines around the country. She is a winner of the Cecil Hackney Literary Award as well as a recipient of grants from the Kentucky Arts Council and the Kentucky Foundation for Women.

Gwyn grew up in Cordele, a small town in south-central Georgia. Her father, Mac Hyman, wrote No Time for Sergeants. Published in 1954, it was a national and international bestseller and was adapted as a play and a movie, both productions starring Andy Griffith. Gwyn now lives in Versailles, Kentucky, with her husband, Angel, and their rescue dog, Fritz.

Learn about Love and Ordinary Creatures.