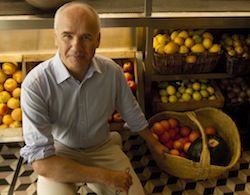 Armand Chauvel is a French journalist and correspondent for Spain and Portugal. Born in France to an extended family of Burgundian winemakers, he spent a large part of his childhood in Senegal and Brazil due to his father’s work as a tropical agronomist.

Armand studied journalism in Paris before taking work in Portugal and later in Spain. Although his journalistic focus is the economy and the business world, Armand is also passionate about the arts. He studied painting in Lisbon as well as playwriting and scriptwriting in Paris before tackling the novel genre. He became a vegetarian in 2006 after viewing the documentary Earthlings, and since then has taken a growing interest in the vegan diet and philosophy.

In September 2012, Armand founded the French-language blog Vegeshopper, which explores consumerism from a vegetarian/vegan perspective and features interviews on the subject with notable individuals. Armand currently resides in Barcelona with his wife and their young son. The Green and the Red is his first published novel.

Learn about The Green and the Red.